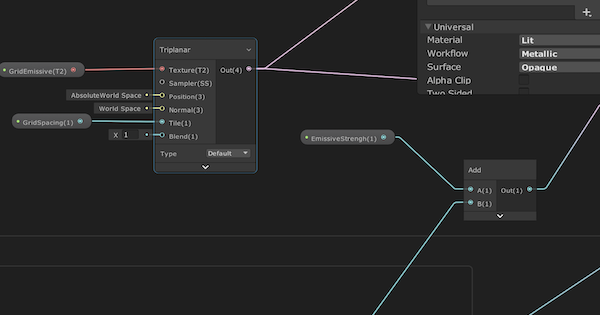 We changed the render pipeline from Built-In to URP in Hepto’s project settings. The project used the ‘Mobile’ template when creating the project, so it had a Built-In render setting, but Unity seems to be URP or HDRP in the future, so we installed URP early and converted materials and so on.

The features of UPR are high quality and high performance even on mobile, and Shader Graph can be used as a custom shader, both of which are key parts in the development of Hepto.

Shader Graph is an editor that allows you to edit URP scripts graphically.

Shader Graph programming creates multiple nodes and connects the input and output of those nodes with a line. Shaders can be created without writing the program source. Since a preview of the processing result of that node is displayed on each node, it is easy to understand the operation (unlike a conventional shader program) and try various expressions.

On the other hand, for those who usually program texts, it is undeniable that it is complicated to simply apply one line and add one node to connect.